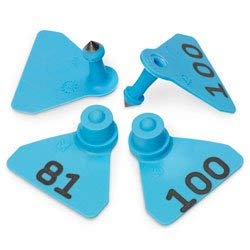 Allflex Numbered (81-100) Sheep Mini Tags - Blue - C31215(E)N: Tag dimensions: 1-1/2 x 1-1/2 Lightweight and flexible enough for the smallest goat kids and lambs Easy to apply using Allflex Universal Total Tagger (C12355N) Durable laser mark guaranteed to last the life of the animalTags numbered 1 to 100 are stocked in packages of 20. To facilitate ordering, we have assigned letter codes for numbering sequences. NOTE: Please allow extra delivery time for tags numbered over 100. Personalized tags cannot be returned for credit. Specify numbers 101 and over. Must be ordered in multiples of 20.These numbered tags are packaged in 20 sequential numbers and can only be ordered as such. Sheep Mini tags also available in orange, pink, and red by special order.

From Allflex brand of products. Offered by Nasco Agricultural and Science - the leader in farming, science, and industrial products.